DATCHET is one of the oldest golf clubs in Berks

Golf had been played on Datchet Mead for many years before the club’s formation but in 1890 the club was officially constituted. Datchet was an interesting choice as a site for the gentlemanly pursuit of golf. For many years the town was known as ‘Black Datchet’ due to the large number of bad characters who lived there. In fact a whole wing at Aylesbury County Gaol was referred to as the ‘Datchet Wing’ as it was filled almost entirely with residents of the town. In the early years the club had a very strong association with Eton College. Many of the club’s founding members were either Masters or alumnii and, given that institutions fine sporting tradition, many Datchet members excelled at other sporting pursuits besides golf. 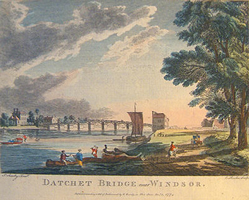 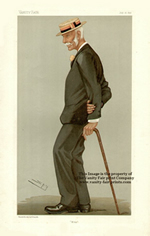 RAH Mitchell
‘Mike’ Mitchell, the first President of Datchet Golf club was not only a fine golfer but was widely regarded as one of the greatest English cricketers of his generation. In fact the incomparable WG Grace described him as “the second greatest of all time…after me.” He was such a well-known sporting figure that the characature opposite, which appeared in Vanity Fair magazine in 1896, needed no explanation of who the subject was. The caption read simply ‘Mike’.
PJ de Paravicini

Percy de Paravicini (1862-1921) was one of the greatest all-round sportsmen England has ever seen. A plus-2 golfer he was a founder member of Datchet Golf Club and captain from 1899 to 1900.
He was a two-footed footballer who played full back for Old Etonians in the last all-amateur team to win the FA Cup in 1882 (they beat the professionals of Blackburn Rovers 1-0). The following year he was capped three times for England in the Home Internationals, the only international football matches in existence at the time. Percy then gave up football to concentrate on his cricketing career. He played first class cricket for Middlesex for over 12 years. Typically he was an all-rounder as well as being a top-class field.

RH de Montmorency
Reychard Hervey de Montmorency was President of Datchet Golf Club from 1921 to 1929. ‘Monty’ is arguably the finest amateur golfer England has ever produced.
Playing off a handicap of plus-6 he was an England international for nearly 30 years.
Monty captained the first England representative side to travel to the USA to take on the Americans in what became the Walker Cup. Remarkably, Datchet Golf Club provided two of the nine England representatives in that match, the other being Percy de Paravacini’s son Freddie.

Other notable members of Datchet Golf Club over the years include:

England cricket legend George ‘Gubby’ Allen; the composer Reginald Armitage (better know as Noel Gay) whose many credits include the songs Leaning on the Lampost, Run Rabbit Run and the musical Me and My Girl; and James Bond’s nemesis Blofeld, the actor Donald Pleasance.

Both Bing Crosby and Bob Hope played here in 1950. The circumstances were rather unusual. They had agreed to take part in a charity match against two British music hall stars, Ted Ray and Donald Peers. This was to have been played at Temple, but such was the enthusiasm of the non-playing public, who poured over the course, that golf was rendered impossible. Seeking sanctuary, the two Americans stars came to Datchet, enjoyed their round free of harassment and finished their day playing darts with members in the bar.

The Boxer Sugar-Ray Robinson, when middle weight champion of the world, trained in Windsor for some weeks before his fight with Randolph Turpin in 1950. He had in his entourage his own golf Professional, Joe Doakes. Robinson and Doakes played virtually every afternoon at Datchet in a fourball with the club’s Professional, Bill Skinner, and any member available. It is remembered that their fleet of dazzling purple-pink Cadillacs almost filled the club’s car park.

A question often asked is “Did any of the Royal Family ever play at Datchet?” The answer is undoubtedly “Yes” Old George Stevens, who farmed the land adjoining the golf course and who died in the 1960’s at a great age, told of how, as a boy, he caddied for King Edward VII when he was Prince of Wales. His Royal Highness, who was somewhat portly and suffered from shortness of breath, used two caddies. One carried his clubs and the other, George Stevens, carried the chair on which His Royal Highness sat between shots while he got his breath back.

At the turn of the century, two of Queen Victoria’s grandsons were members at Datchet. One was Prince Albert of Schleswig-Holstein, son of Princess Christian of Schleswig-Holstein, Queen Victoria’s fifth child. The other was his younger cousin, Prince Leopold of Battenburg, whose mother was Princess Beatrice, Queen Victoria’s youngest daughter. Prince Albert became very keen and played in club competitions, represented the club in inter-club matches, took the chair at annual general meetings and sat on the commitee. His presence in the chair at the A.G.M. would presumably have minimised fractious discussion, which has been known to take place on less auspicious occasions.

Foreign titles were given up by the Royal Family during the 1914–18 war when the House of Windsor was established but, as far as is known, their Highnesses did not rejoin Datchet when the club re-opened after the war.

Our most recent connection was when Prince Andrew arrived at the club, complete with body guards, to buy a putter from the Professional’s shop.